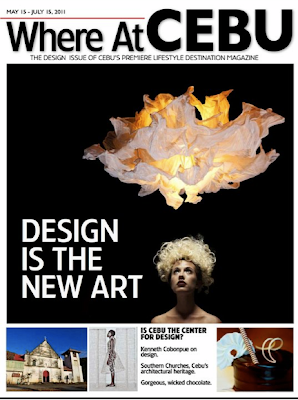 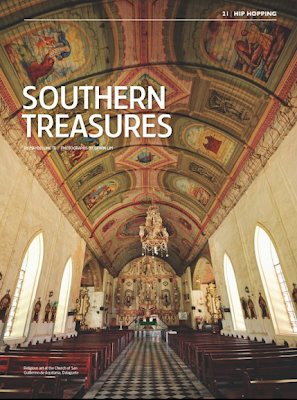 A few months ago, Maricris Encarnacion, my Where at Cebu editrix who wears many interesting hats, gave me this assignment for the May-July 2011 issue. It's been a long time since I've visited a few of Cebu's notable heritage churches. No doubt, I am looking forward to revisit while I'm in town. Amazing photography by Erwin T. Lim, one of the top photographers in the country. 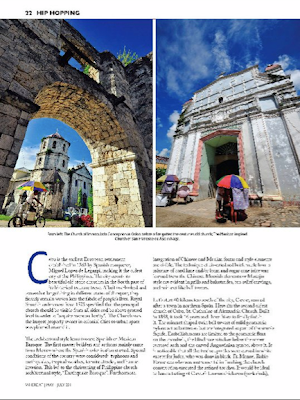 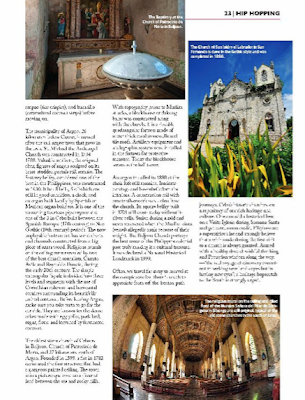 "Cebu is the earliest European settlement established in 1565 by Spanish conqueror, Miguel Lopez de Legazpi, making it the oldest city of the Philippines. The city counts its beautiful old stone churches in the South part of its historical treasure trove. Albeit overlooked and somewhat languishing in different states of disrepair, they fiercely remain woven into the fabric of people’s lives. Royal Spanish ordinances from 1573 specified that the principal church should be visible from all sides and be above ground level in order to “acquire more authority”.  The Church was the largest property owner in colonial cities so urban space was planned around it." --- M. Te, Where at Cebu 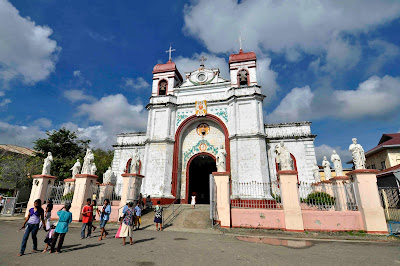 "Let’s start 40 kilometers south of the city, Carcar, named after a town in northern Spain. Here sits the second oldest church of Cebu, St. Catherine of Alexandria Church. Built in 1858, it took 16 years and three friars to finally finish it. The minaret shaped twin bell towers of solid geometric pylons act as buttresses but are integrated as part of the simple façade. Embellishments are limited to the geometric flora on the spandrels, the blind rose window below the upper recessed arch and the carved Augustinian symbol above it. It is noticeable that all the twelve apostles were carved in white except for Judas, who was done in black. Fr. Manuel Rubio Fernandez who was instrumental in finishing the church construction executed the refined touches. It would be ideal to have a tasting of Carcar’s famous chicharon (pork rinds), ampao (rice crispies), and bucarillo (caramelized coconut strips) before moving on." --- M. Te, Where at Cebu 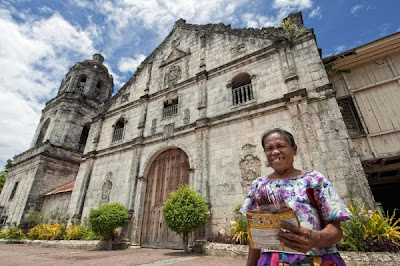 "The architectural style leans toward Spanish or Mexican Baroque. The first master builders and artisans mainly came from Mexico where the Spanish colonization started. Special conditions of the country were considered:  typhoons and earthquakes, tropical weather, termite attacks, and human invasion. This led to the christening of Philippine church architectural style, “Earthquake Baroque”. Furthermore, integration of Chinese and Muslim forms and style elements are visible. The technique of air-dried red brick made from a mixture of coral lime and/or loam and sugar cane juice was learned from the Chinese. Moorish elements or Mudejar style are evident in grills and balustrades, bas-relief carvings, and minaret like bell towers." --- M. Te, Where at Cebu 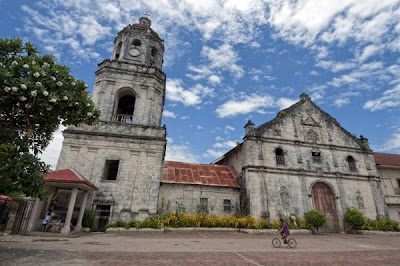 "The municipality of Argao, 26 kilometers south of Carcar, is named after the sali-argaw trees that grew in the area. St. Michael the Archangel Church was constructed in 1734-1788. Valuable artifacts, the original altar, figures of angels sculpted on its brass-studded portals still remain. The 5-storey belfry, considered one of the best in the Philippines, was constructed in 1830. It has 8 bells, 5 of which are still in good condition, a clock, and an organ built locally by Spanish or Mexican organ builders. It is one of the remaining fourteen pipe organs and one of the 3 in Cebu built between the Spanish Baroque (17th  century) to Neo Gothic (19th century) periods. The now unplayable instrument has wind chests and channels constructed from a big piece of narra wood. Religious murals on the ceiling were executed by two of the best church muralists, Canuto Avila and Reynaldo Francia, during the early 20th century. The simple rectangular façade is divided into three levels and segments with the use of Corinthian columns and horizontal cornices surrounding its beautifully arched entrance. Before leaving Argao, make sure you take torta to go for the car ride. They are known for the dense cakes made with egg yolks, pork lard, sugar, flour, and leavened by fermented coconut." --- M. Te, Where at Cebu 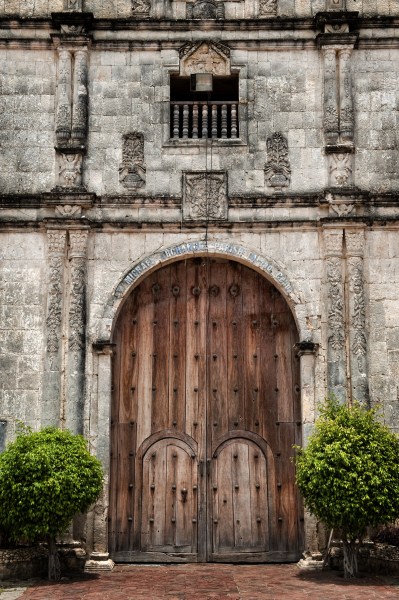 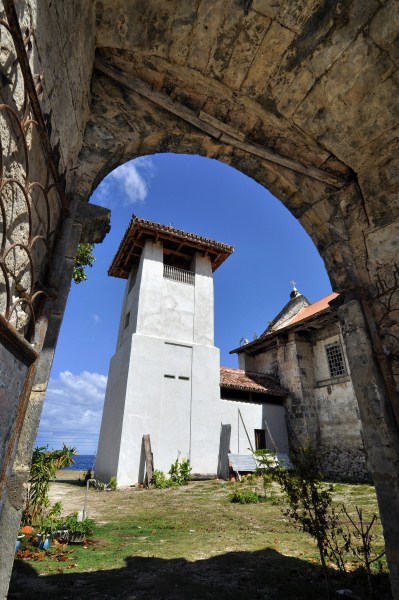 "The oldest stone church of Cebu is in Boljoon, Church of Patrocinio de Maria, and 37 kilometers south of Argao. Founded in 1599, a fire in 1782 decimated the first structure that had a gorgeous painted ceiling. The town is in a picturesque cove on a sliver of land between the sea and rocky hills. With topography prone to Muslim attacks, a blockhouse or dakung balay was constructed along with the church. It is a sizeable quadrangular fortress made of meter thick coral stonewalls and tile roofs. Artillery equipment and a telegraphic system were installed in the fortress for protective measure. Today the blockhouse serves as the bell tower."--- M. Te, Where at Cebu 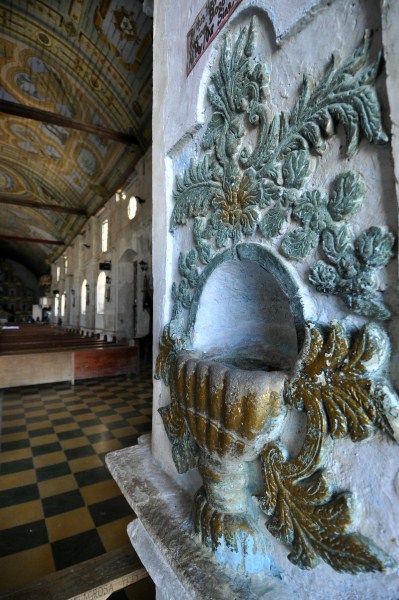 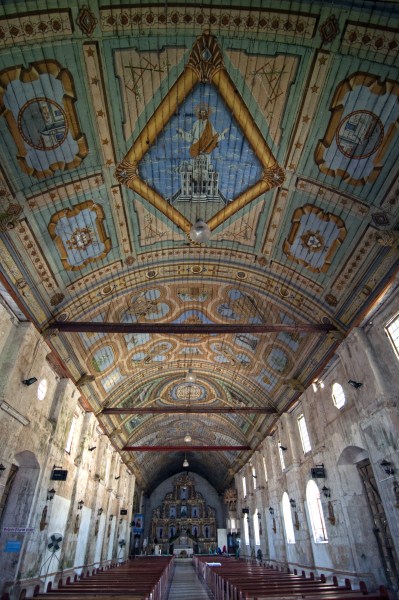 "An organ installed in 1880 at the choir loft still remains. Intricate carvings and bas-relief adorn the interiors. A communion rail with ornate silverwork was stolen from the church. Its square belfry built in 1701 still exists today without its silver bells. Stolen during a raid and never recovered when the Muslim vinta (vessel) allegedly sunk because of their weight. The Boljoon Church portrays the best sense of the Philippine colonial past truly making it a cultural treasure. It was declared a National Historical Landmark in 1999." --- M. Te, Where at Cebu 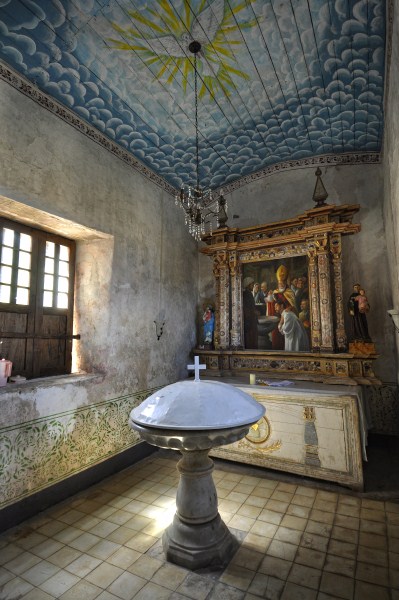 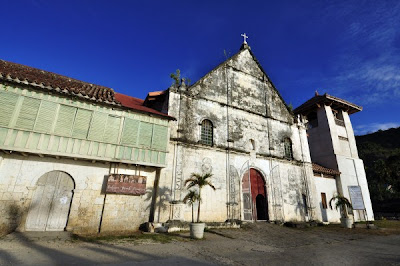 "Often, we travel far away to marvel at the conspicuous but there is much to appreciate from off-the-beaten-path journeys. Cebu’s historic churches are a repository of our rich heritage and culture. One can add a historical bent on a Visita Iglesia during Semana Santa and get extra mana credit. Filipinos are a superstitious lot and strongly believe that a wish made during the first visit to a church is always granted. Armed with a healthy dose of wishful thinking and Proustian wisdom along the way, ---“the real voyage of discovery consists not in seeking new landscapes but in having new eyes”; a heritage hopscotch to the South is strongly urged." --- M. Te, Where At Cebu
Posted by Froulala at 12:00 PM

Thanks for sharing these photos and info. Found you via twitter. But Cebu is beautiful... love seeing wonderfully beautiful places and dreaming of going someday.