I was talking to my Twitter friend,  Norbridge Antiques   , about antiquing in South Florida the other day. Our conversation and my latest post on the Withit WOW awards inspiration made me go back through sunny moments in Cebu and Florida. The first few pictures are from one of my favorite shops in Palm Beach, F.S. Henemader Antiques, Inc. 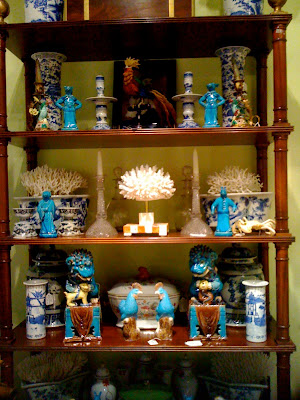 This tableau's got my number with the
turquoise foo dogs, Chinese blue and white vases,
and corals. 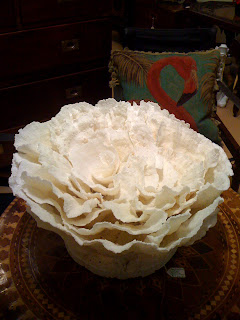 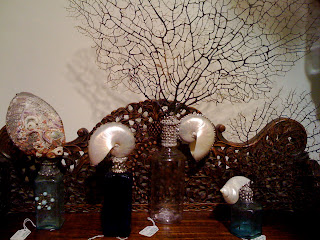 Nautilus shell and sea fan covered bottles
romanticizes the idea of sending a message in a bottle. 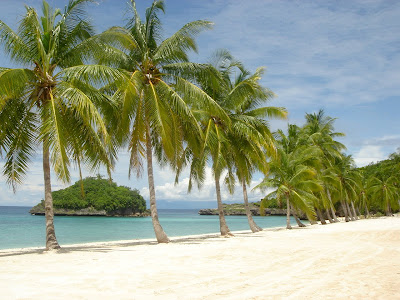 Carnaza Island, Philippines
where I spent a long day picking
red and blue corals that washed off the shore 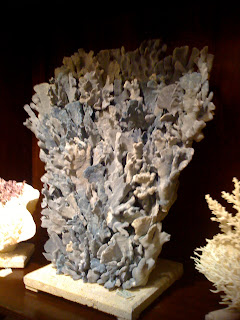 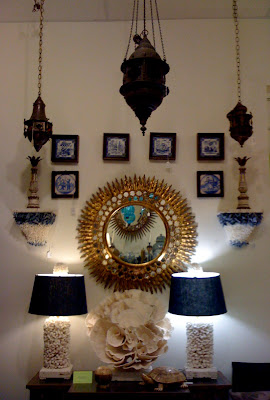 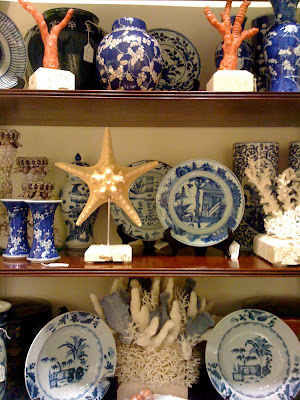 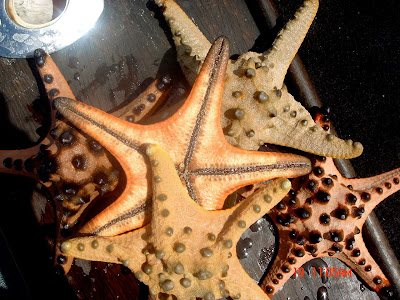 starfishes from Bungan Island
where we like to go clam digging 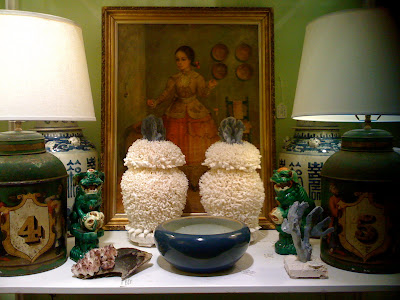 The next few photos with an * are from Christa's South Seashells in West Palm Beach. 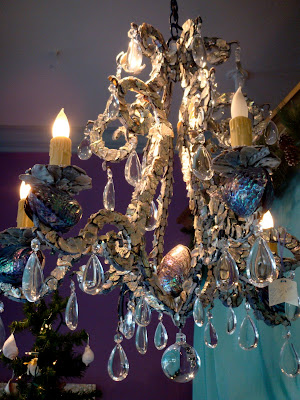 *The electric combination of turquoise and purple 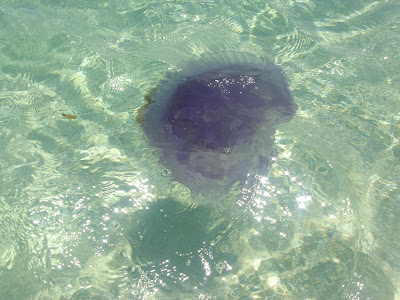 is much inspired by nature just like the jellyfish
drifting along the sandbar as we sunned ourselves. 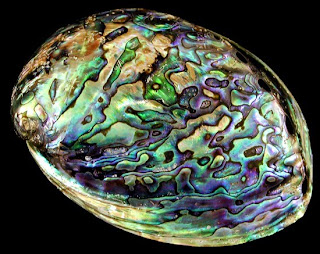 The colors of the paua or abalone shell exhibit this as well.
I've gotten some great ones for my collection from
New Zealand and the Philippines. 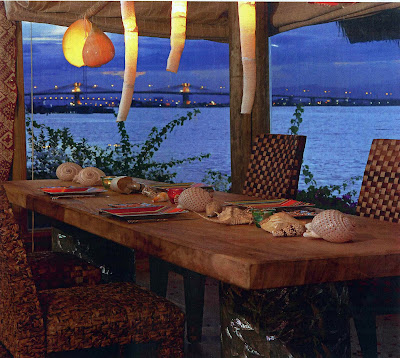 Open House, Mactan Island Philippines
Here is one of my projects where I designed
the crushed abalone pedestals as bases
for the reclaimed wood slab from Carnaza Island.
The bases and chairs were all made in our workshop.
Snug designer, Clayton Tugunon,
created the tubeworms and shell light fixtures. 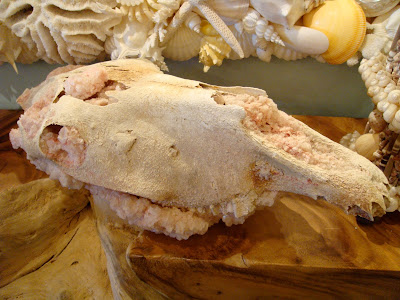 *If there was one thing I wanted to take home from my antiquing in West Palm Beach last December, it was this horse skull encrusted with pink salts from the Mojave Dessert. 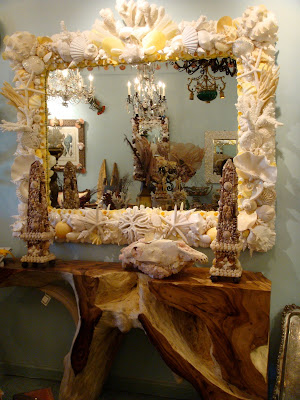 *This mirror encrusted with an all white/cream ensemble
from mother of pearl discs, corals and shells stood out 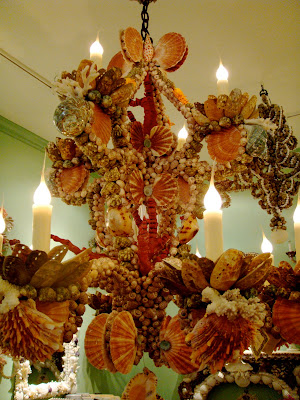 among the rest that were multicolored. 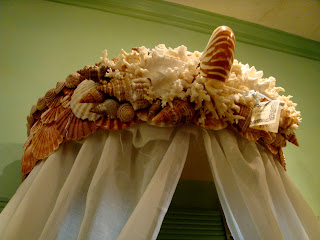 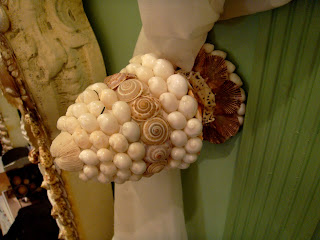 *and curtain holdback make subtle touches.
As much as I love shells, I can only take so much
of it in a room so these accents are just enough. 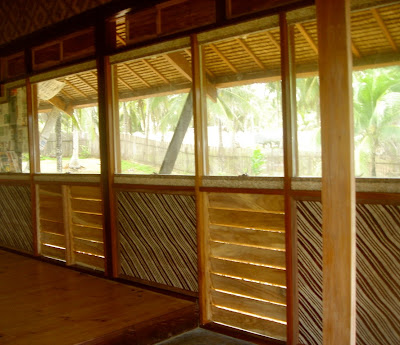 It's not very clear in this photo but I had the aluminum bands of the glass windows of my suite in the Calicoan Island Surf Camp encrusted with tiny shells.  The shutters (which were my friend, Garrison Rousseau's, fab idea) interspersed with the solid panels are covered with handwoven mats or banig made of palm leaves. These were woven by women a few towns away.  I worked with a shell artisan who interpreted my design just the way I wanted it. I kept the interior shell inlay plain with two tone shells mimicking the two tone mats. 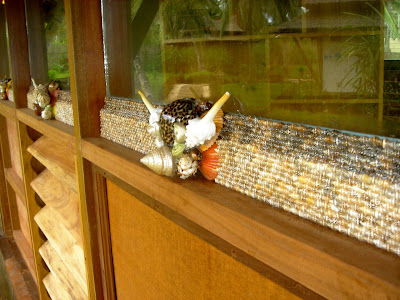 However, I added more ornamentation to the exterior shell inlay for the bottom 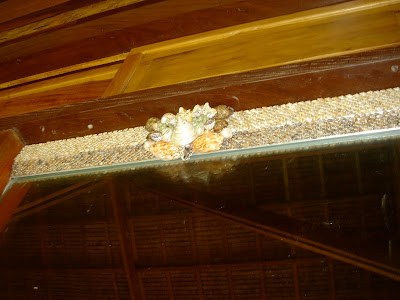 and top panels.
p.s. I will post more photos of this cottage and talk about Calicoan Island more in a future post.
.
Posted by Froulala at 3:02 AM

Your post incorporating the beauty of the Philippines and Florida is like being transported to paradise. I appreciate your posting of my link and brand. Many thanks.
Kind regards.

Anytime!! It's truly a pleasure and thank you for making me relive my memories as well

Love all of the blue and white and the shells/coral...very beautiful peices! xx

i want to go to carnaza someday..