Neither Good nor Bad

Growing up, my father would time and again tell me this Chinese parable especially when I'm going through seemingly rough times 'cause normally, no one ever complains about the good times. Pragmatic and grounding, I go back to these words of wisdom when a good dose is needed. I found a slight variation online written by Chuck Gallozi which he titled That's Life but we call it the Neither Good nor Bad story at home.

The following is an ancient Chinese parable that is told to this day because of the wisdom it contains. Once upon a time, a poor farmer was dismayed to learn his horse had died during the night. "That's terrible," his neighbors said, "how will you till this rocky soil without your horse?" 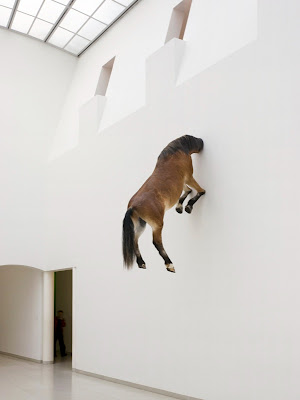 photo taken from a Maurizio Cattelan exhibit
at the Museum fur Moderne Kunst,
Frankfurt am Main, Germany 2007
"That's life," said the farmer to his friends. Meanwhile, elsewhere in the village, a certain rich man heard of the farmer's plight and took pity on him, giving one of his many horses to the poor man as a gift. "That's wonderful! How lucky you are!" exclaimed the farmer's friends. But the farmer only said, "That's life."


Just two months later, frightened by flashes of lightning and bursts of thunder during a fierce summer storm, the poor farmer's horse leapt over the fence and ran to the mountains. "That's terrible! What will you do now?" the farmer's neighbors asked. "That's life." replied the farmer. 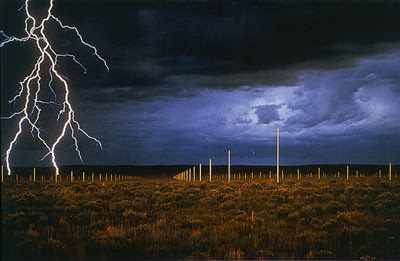 Walter de Maria's Lightning Field
photo from Dia Art Foundation
(this one's in my bucket list)
In less than three months time, and much to everyone's amazement, the runaway horse returned to the poor farmer. But he did not return alone, for he was accompanied by a magnificent stallion. Now the farmer had two horses! And if his son worked with one and he with the other, they could accomplish twice as much. The neighbors marveled at such great fortune. "That's wonderful!" they said. But the farmer simply replied, "That's life."
Soon it was winter and no longer possible to till the frozen soil. The farmer's son thought this would be a good time to break in the new stallion for riding. However, the small, thin boy was no match for the mighty stallion. He was violently thrown from the horse and severely injured, breaking several bones in his leg. "That's terrible," said the neighbors, "now your son is lame." "That's life." came the answer. 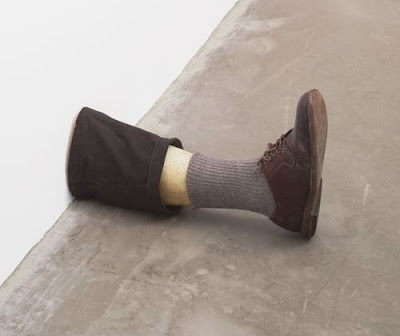 Robert Gober Untitled Leg 1989-90
*Saw his amazing art retrospective at Schaulager Basel---disconcertingly good!
In the spring, a military officer came to the village. He took with him all able bodied young men to fight in the war taking place in a neighboring province. Sadly, many of the village's favorite sons died in the war. "How lucky you are your son is lame, for he is safe with you," the neighbors said. Thanking them for their good wishes, the poor farmer said, "That's life." 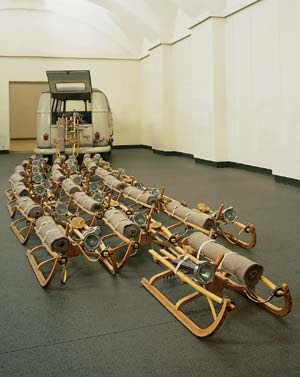 Joseph Beuys The Pack, 1969
photo credit
The above story continues to be told because it is a microcosm of life. In just a few paragraphs it is possible to gain an understanding of important life principles. For example, something good can come out of something bad, so don't moan about events when you don't know how they will turn out. Also, something bad can come out of something good, so don't grow too attached to your fleeting good fortune.
The most important principle in the story is that we can never know at any given moment whether our circumstances are 'good' or 'bad'. Only time will tell. So, how are we to treat life? With open arms. Accept things as they are. They are neither 'good' nor 'bad.' They simply ARE. At all times, make the most of what you have. Another way of expressing the principle under consideration is in the end, everything will turn out all right. If it isn't all right now, it isn't the end. 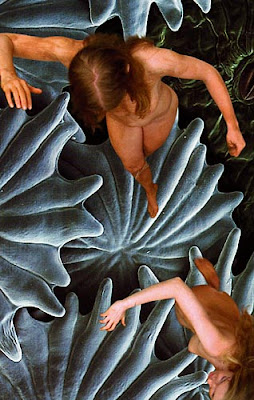 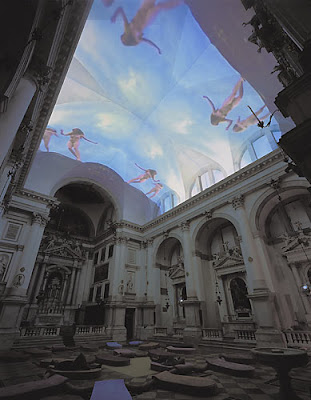 Pipilotti Rist Homo Sapiens
Many are blind to the joys of life. The cure for their blindness is not sight, but insight. They don't need eyes; they just need understanding. They need understanding of life principles, such as nothing is what seems to be. In other words, something that appears to be 'good' may actually be 'bad.' or something that appears to be 'bad' may be 'good.'

a French iron optician's shop sign
Our perspective, perception, viewpoint, or attitude should not be based on the input of sensory data; that is, it should not be based on the appearances of things. Rather, our view of life should be based on the light of knowledge and understanding. Let's move from the theoretical to the practical. Consider this: judging people is like driving a car, we clearly see the headlights or glaring faults of others, yet our own headlights and faults are invisible to us. When we apply this knowledge, we will stop being offended by the actions (appearances) of others. We will see them not with our eyes, but with our hearts. 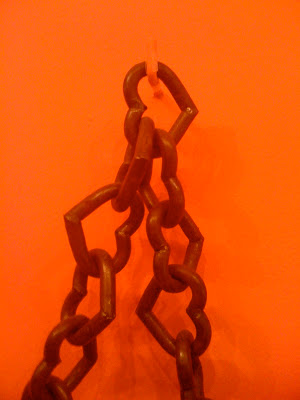 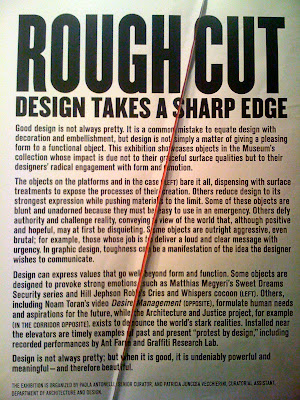 Rough Cut:Design Takes a Sharp Edge
I encounter young people complaining that they are not appreciated at work. Can you see the irony in this? The fact that they are complaining about their workplace proves that they do not appreciate their job. Aren't they guilty of the very thing they accuse their employer of? They need to learn that happiness flows not from a particular position, but from a particular disposition. When we maintain the proper disposition, perception, or perspective, we enjoy heaven on earth, for heaven is not a matter of altitude, but of attitude. Adopting the correct view of life is essential. It is the difference between happiness and misery, health and sickness, and success and failure. Because of its importance, let's consider the following points.

1. Become aware of your perception of life. Are you always cheerful, grateful to be alive? If not, stop complaining because it's unproductive. Rather, understand that perception comes not from what you see, but from what you are. If you are unhappy, the problem lies with you. It is not the world that is unhappy, but YOU that are unhappy, so it is not the world that needs to change, but YOU that needs to. 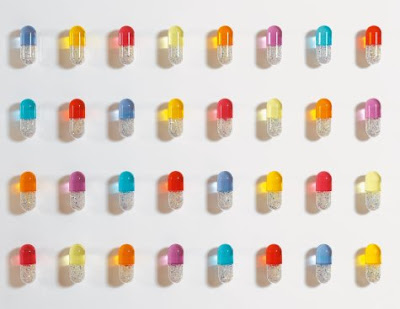 Mauro Perucchetti Luxury Therapy 2008
2. How do you need to change? Begin by realizing that there are an infinite number of ways to interpret events. And you have the power to choose one of the unlimited viewpoints. You could, for example, choose to look at a particular situation negatively. But why would you want to do that? For such a viewpoint is harmful. Decide now to stop reacting to life's challenges with automatic responses. Learn to stop and think before you act. See the world with the light of reason and don't judge it by its appearances. 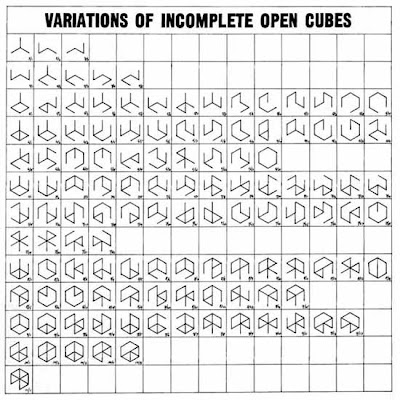 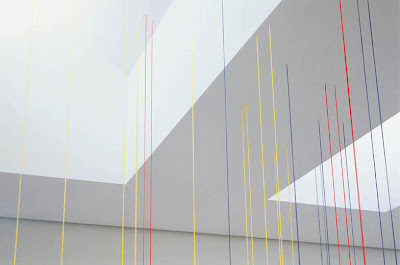 Fred Sandback
6. Deciding to change is not enough. Don't stop with good intentions, but end with good follow-through. Make a plan and complete what you begin. 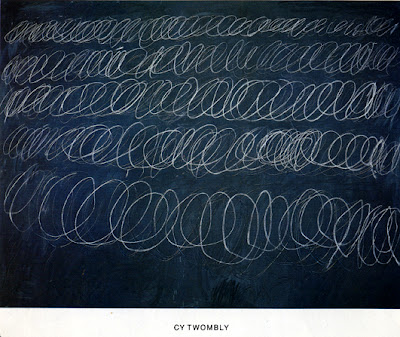 Cy Twombly
7. Developing new habits always involves some effort, but don't be discouraged by a little discomfort. Remember, life is not meant to be comfortable; it is meant to be exhilarating. 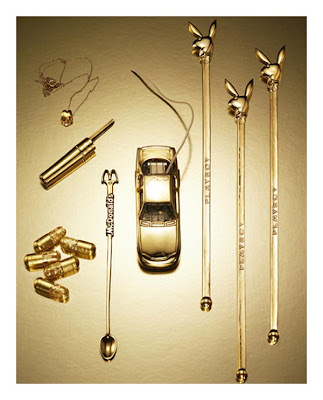 Tobias Wong
8. When facing difficulties, remember that they did not come about by dumb luck or blind fate. Luck is not dumb and fate is not blind. It is you that are blind. After all, how can you see today how things will turn out tomorrow? Be like the poor farmer and say, with peace of mind, "That's life". 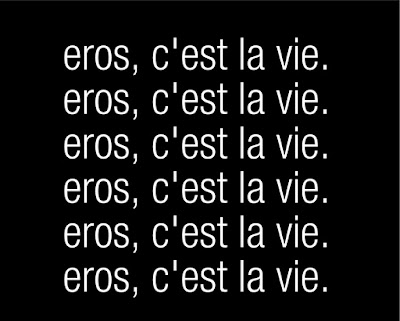 Eros, C'est La Vie
It may seem a bit strange to have these thoughts on Thanksgiving (I didn't grow up celebrating it) and the images are not tres frou la la! They are artists I admire and at times, it is this sense of displaced normalcy in their work that inspires me as a designer. Everyday, I live with a gloriously grateful heart and know I'm truly lucky for all my blessings. And everyday, I try to communicate that to family, friends, colleagues, associates, acquaintances, and the universe as much as I can through words, notes, deeds---combining old school and digital means.  Rarely do I take the time to reflect on the unpleasant experiences that contributed to where I am today. So on this Thanksgiving, I honor and thank the bad as much as I do the good 'cause it's not all lavender and roses!
Posted by Froulala at 12:13 PM