This was a post I started last Holy Week but never finished. I've decided to do so this week and reposting the first two parts from last year. As Confucius said, when you teach a man how to fish, he will eat for a lifetime. I learned a good bit about myself on this trip and would like to share some thoughts and photos that were published under my Gypsy Queen column from Cebu's Sunstar Daily in 2006.
April 2, 2010
Growing up, we observed Holy Week strictly with the supervision of my deeply religious grandmother, Gliceria. I followed the drill like a convent-bred schoolgirl. Later on, it morphed into bacchanalian holidays that she would not have approved of. After years of pious observance, then of revelry, I think I found a balance during this particular time of my life (2006) when I went on a week long fishing trip on the Pacific Ocean with a former boyfriend. I'll call him the FBF and no, he didn't become a former after this trip either. I will always be thankful to him and our dear friend, Winsor White, for teaching me how to fish. Winsor White is a highly regarded furniture designer who went to the esteemed Kendall College of Art and Design. He started his career at Baker Furniture when it was still owned by Siebe Baker and has had many interesting stints working with furniture greats  like Paul Maitland-Smith among others. Winsor is now in his 80s and continues to live life to the fullest in every way by designing, fishing, traveling, staying in love, and enjoying the fine things in life. Truly an inspirational character. 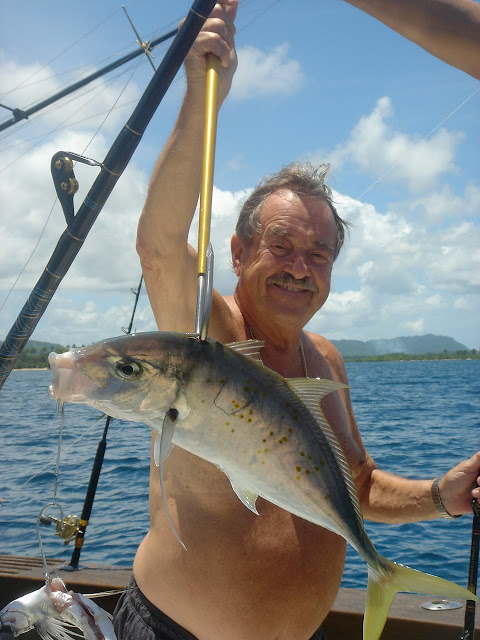 Winsor White
I am not what you would call outdoorsy or adventurous but I'll try almost anything once. The FBF was an avid fisherman who wisely and slowly angled me into the sport. My first time to Siargao was on board Winsor White's luxe El Gato Negro with a tuna tower.

I landed an 18 and 22-kilo sailfish on my own. Yes! I reeled them in myself based on IGFA (International Game Fish Association) guidelines. Whether it was beginner's luck or sweeet sailfish carpaccio, I was immediately hooked! They normally catch and release but I took them back and hung them as trophies for my first photo op 'cause it would be hard for someone my size and lack of experience to land two at the first go. I will write a prequel about this following the Fish Tales Series. 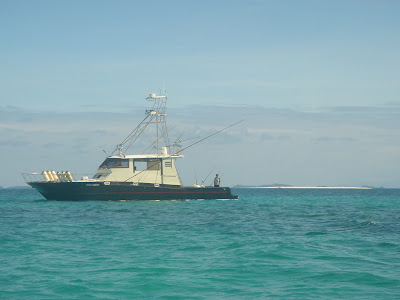 it's not a mirage, what you see on the right is a sandbar 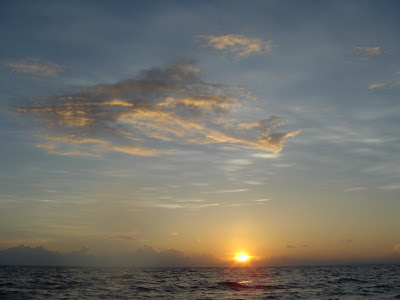 Day 1: April 9th, 2006
There had been much pre-embarkation skepticism amongst our friends (or frenemies?) and fisher folk that I wouldn't survive the nine-hour one way trip on board the Malasugi, a 27-foot center console. Someone even asked, "why are you doing this? is it love or delirium?" The well maintained Malasugi, though utilitarian in looks and amenities, had a great reliable engine (sorry, not capable of remembering engine models). The FBF had gone on a few  similar journeys so his expertise and experience was something I didn't even think twice about. This particular time though, I strongly conditioned myself that luxury is not about the of the vessel but attitude. Armed with a bit of that, basics that felt like luxuries, liquids and a fruit platter (except for bananas since they're considered bad luck for fishing), we set off at the break of dawn. 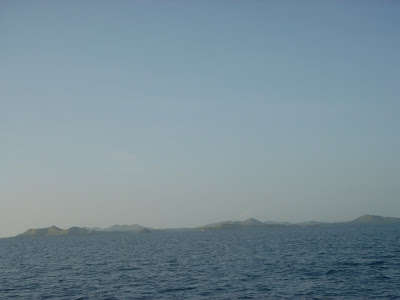 While enjoying majestic seascapes, absorbing the rays and breeze, I dropped my all time favorite Gucci aviators with cool monogrammed lenses in the water three hours into the trip. Perhaps it was Poseidon's way of telling me that I shouldn't care too much about how I looked out in the ocean and there's nothing wrong with the polarized sunglasses that didn't look too cool with my embroidered caftan.

We stopped by Maasin, Leyte to refuel and ate the CPA (chicken pork adobo) and rice that Eva, the cook, lovingly made for us the night before. It is commonly packed for Filipino mountaineers and travelers because it keeps well without refrigeration. Brunch was at Steve and Jenn Brown's home by the water. Packing some marmite along  with his fishing gear, Steve joined the journey on his boat from here. 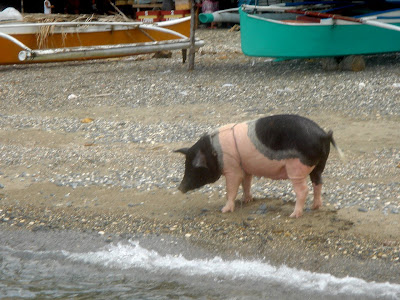 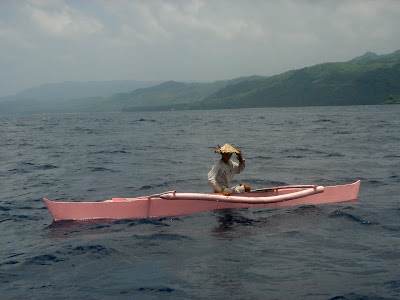 Along the way, we met fishermen who brave the ocean on these bancas or outrigger canoes. I can't complain about the size of our boat if these men handline fish day in and out on these. 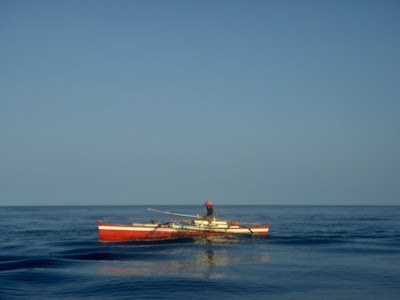 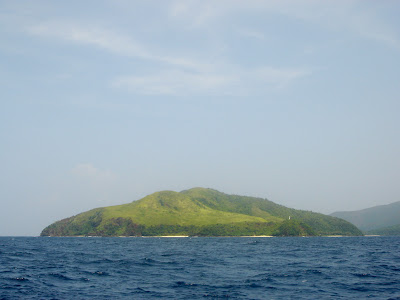 The ride was pleasant most of the way as I read Wei Hui's Marrying Buddha. Her semi-autobio of risque adventures and esoteric interests was a good beach read. The waves got bigger at the turn of the Pacific but I was too eager to see land to even bother much. Here's a rudimentary map of our journey.
View Fish Tales in a larger map 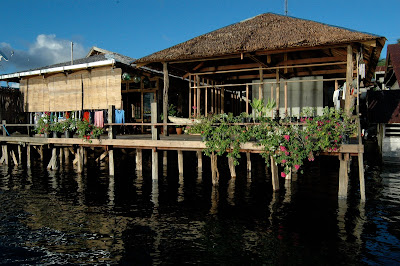 We docked at Bong Castillo's home away from his Cebu home just in time to view the sunset from the deck.  He was so taken by the bucolic charms of Pilar, Siargao's fishing town, that he built two cottages along the waterfront village. 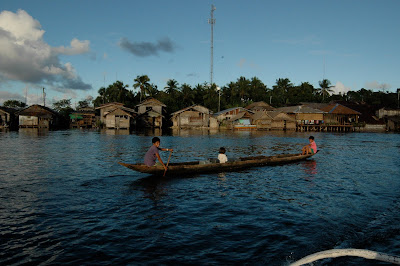 He made an effort to maintain its rustic appeal by blending in with the simple architectural landscape but equipping them with modern conveniences. Nature meets nurture. 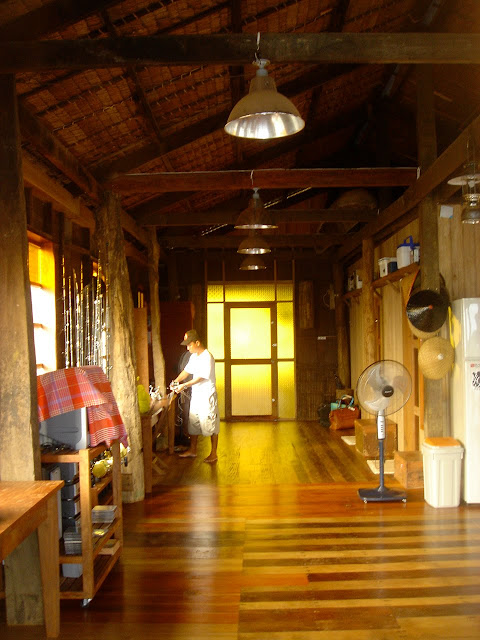 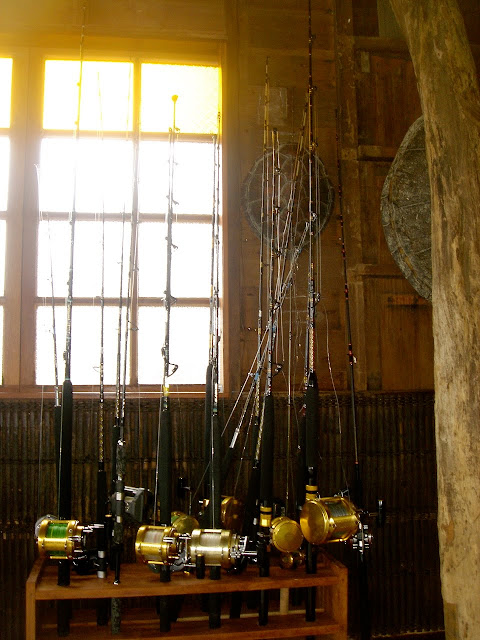 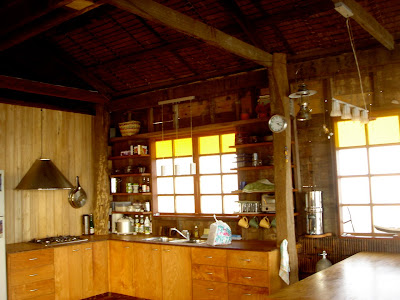 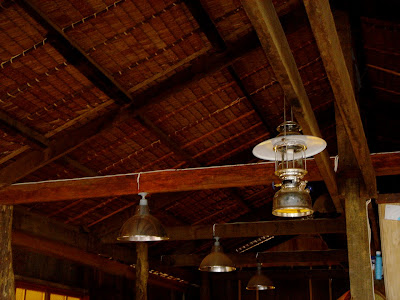 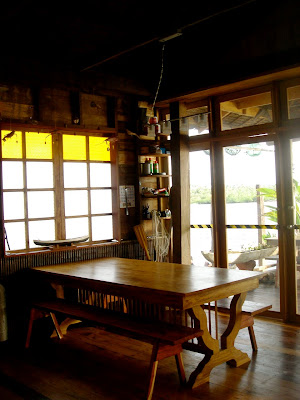 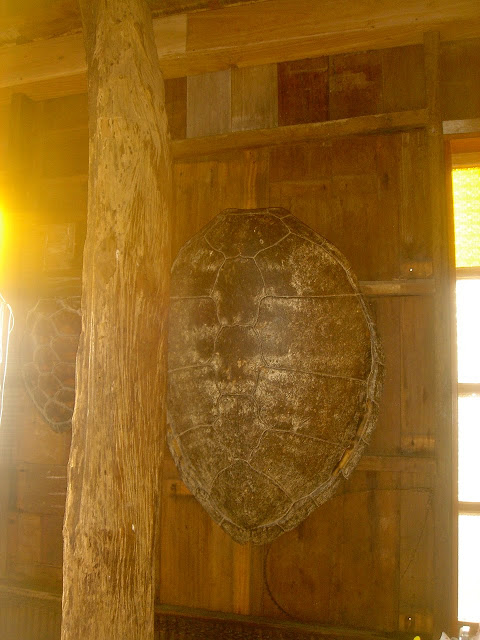 Woke up to the crowing of cocks and oinking of the pigs in the vicinity and warmed up to some tai chi, yoga and pilates with the other ladies. 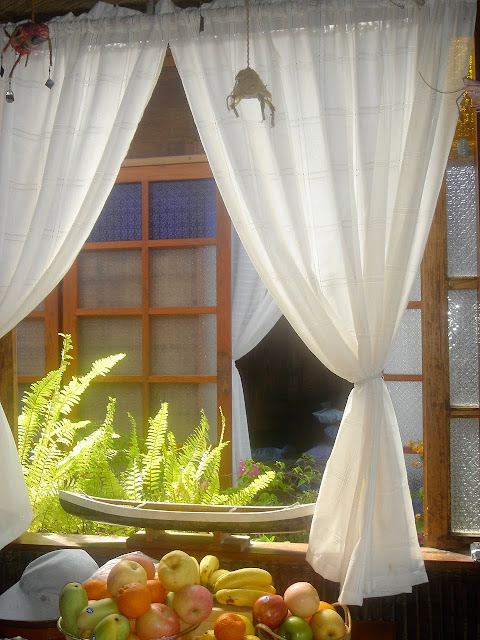 Time felt like it was moving slow for some reason. I suppose this is what happens as one decompresses from the city. 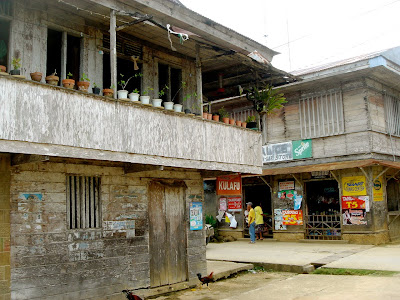 By midday, I had been around the village and literally did some window shopping. 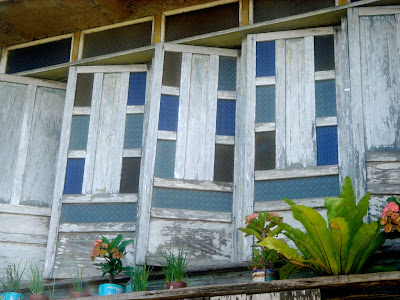 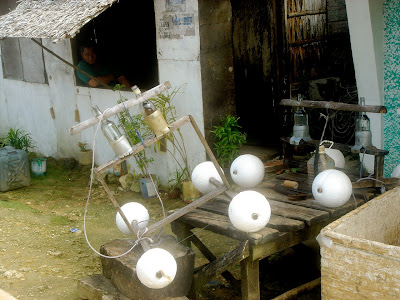 upcycled ingenuity
petromax lamps attached to styrofoam buoys
for night fishing
I knocked on doors to chat with the friendly locals while surveying their wares. Mind you, we weren't being rude. Many times, they would have their old wares left out in the open. Most are keen to have new things. The FBF thought that the shopping bug wouldn't hit me  here but we took home an eight seater wood dining table with a solid plank top , a pair of black crows and some bric-a-brac. Shipping was via slow boat. In a country of 7,100 islands, when there's a will, there's always a waterway! 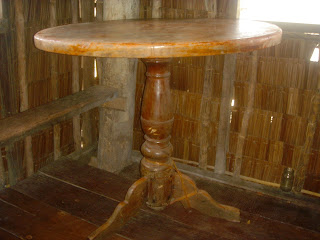 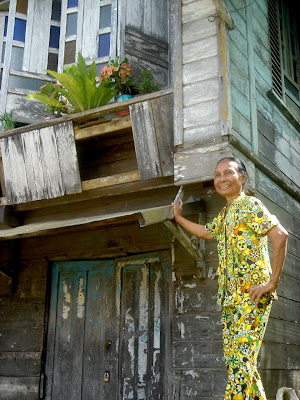 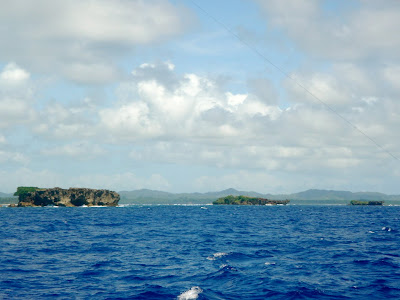 In the afternoon, we trolled along the
three rocks of Port Pilar but didn't catch any fish.

As soon as we docked, I hurried to the mercado to buy dinner.
This yellow fin tuna, about 5' long, just came in.
I posed with the fish before it was weighed in.
We had some mighty succulent medium rare steaks that night.
to be continued...
Posted by Froulala at 4:08 PM